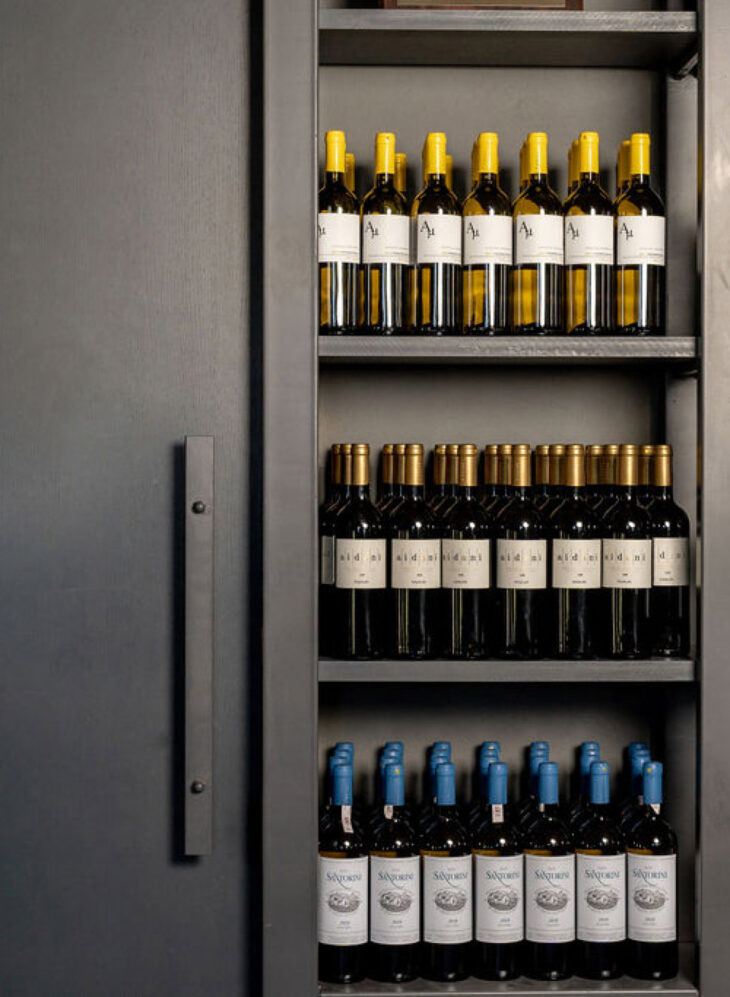 The winery of Domaine Sigalas is nestled between vines on the scenic plain of Oia in the northern part of Santorini. The 40 hectares of surrounding vineyards are cultivated in a sustainable manner and the winery’s annual wine production reaches 200,000 bottles. All wines are crafted with great attention for the varieties of Santorini and the neighbouring Cyclades. Domain Sigalas is one of the most prominent exporters of Greek wines worldwide, and the winery’s renowned, award-winning labels are also available across Greece.

To the overall story of Assyrtiko there is a chapter before and another one since Paris Sigalas. He is the pioneering winemaker who applied mathematics and other innovative ideas to oenology and viticulture to elevate Santorini’s wines to international stardom. The 1991 Santorini is his maiden vintage, the first wine to be labelled Protected Designation of Origin, marking the start of operations at Domaine Sigalas.

Coming from a winemaking family, like most Santorinians, the future mathematician Paris Sigalas spent his summer holidays on the island. Together with friends, he helped out with grape-picking and in the production of the family's wine, a process that increasingly fascinated him.

Gradually, Sigalas took over the reins of his grandfather's vineyard and started crafting wine by his own guidng principle: “the dynamic evolution of tradition". It is the belief that innovation and technical savviness can coexist in a creative relationship with the ancient winegrowing traditions of the island.

As Paris Sigalas has said, it was his passion for tasting and evaluating wine that eventually set the high bar for his own wines. 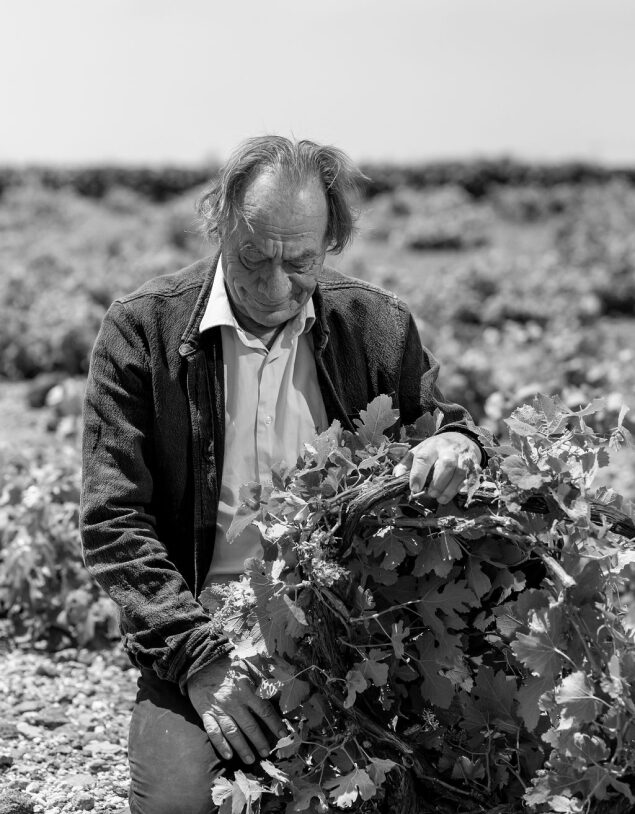 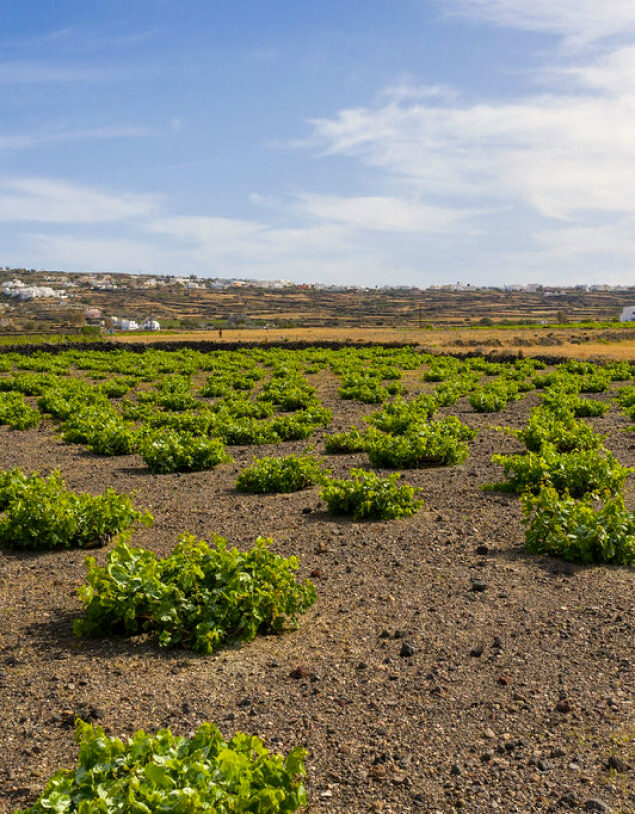 Santorini is globally recognized as an excellent wine region.

Its vineyard is one of the oldest in the world and has been cultivated uninterruptedly for over three thousand years. The soil is volcanic and thanks to this peculiarity it is one of the rare vineyards that were not affected by phylloxera. Most of the varieties here are ancient, with Assyrtiko being the dominant variety (covering about 70% of the land under vine). Assyrtiko is a virtuous “multi-dynamic” or versatile variety that is now considered one of the most important white varieties in the European vineyard.

Santorini’s historic sweet sun-dried wine, the famous Vinsanto, is mainly made from Assyrtiko (it contains at least 50%. Assyrtiko complemented by other white varieties of the island). Traditionally it was made from Assyrtiko with a small percentage of Aidani.
Also made with at least 80% Assyrtiko (supplemented with Aidani and Athiri) are PDO Santorini, PDO Santorini Barrel and the traditional white wine of Santorini called PDO Nychteri (which is an overripe harvest wine with an alcoholic strength of more than 15% that gets fermented and matured in old oak barrels for more than three years). 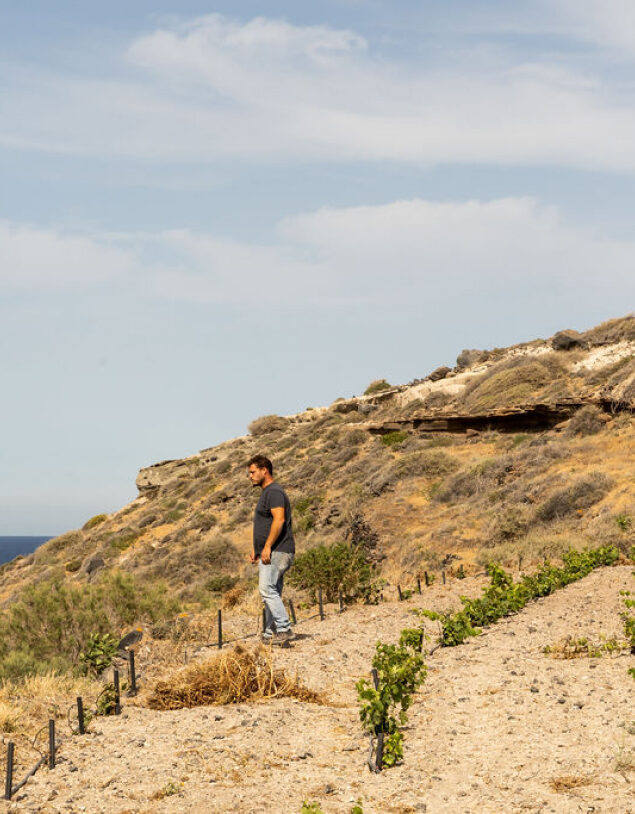 The winery of Domaine Sigalas is nestled between vines on the scenic plain of Oia in the northern part of Santorini. The 40 hectares of surrounding vineyards are cultivated in a sustainable manner and the winery’s annual wine production reaches 200,000 bottles. All wines are crafted with great attention for the varieties of Santorini and the neighbouring Cyclades. Domain Sigalas is one of the most prominent exporters of Greek wines worldwide, and the winery’s renowned, award-winning labels are also available across Greece.

Domaine Sigalas is known to be one of the most exacting Santorinian wineries, constantly experimenting in the vineyard as well as in the cellar with the aim to bring forth the best quality and uniqueness the Santorini’s terroir has to offer.  Innovation and technical savviness coexist in a creative relationship with the ancient cultivation traditions of the island of Santorini.  All winegrowing decisions are based on the guiding principle of founder Paris Sigalas, which is best phrased as a “dynamic evolution of tradition”. 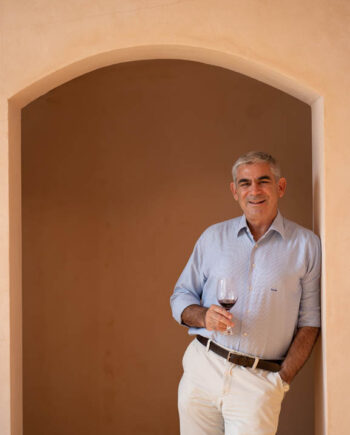 Stellios Boutaris | CEO & Chairman of the board

Stellios' relationship with Santorini dates back to 1985, the year he crushed his first vintage here when his family began operating on the island. Little did Stellios know then that he would return in 2020 to take up the role of CEO at Domaine Sigalas. He holds a BA in Mathematics from the Wesleyan University (USA), an M.Sc. in Econometrics from LSE (U.K.) and an MBA from INSEAD (France), and a WSET Diploma. Stellios has 25 years of experience in marketing, sales and finance in the beverage industry. He started as brand manager for Paterno Imports in 1991 and became instrumental in expanding the distribution of Boutari wines in North America. In 1995, around the time the company created the Mythos beer, he took over the responsibility for the sales of the Boutari Group. He held that position until his move to Kir-Yianni Estate where he remains today’s Managing Director. Stellios is fond of architecture and design. He is married with three children. 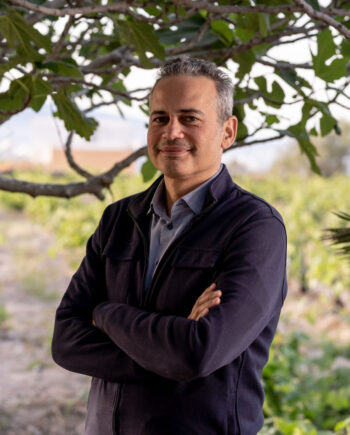 Lambros joined Kir-Yianni in 2013 to lead the company's international development and commercial management division and became general manager at Domaine Sigalas in 2020. He has over 20 years of experience in the areas of international sales, communication and consulting. His academic degrees are in Mechanical Engineering, Environmental Technologies and Business Administration from the University of Aachen in Germany. Lambros also holds a 3rd level WSET degree. He speaks fluent Greek, English and German. Lambros loves gastronomy, travelling, motorcycling and tennis 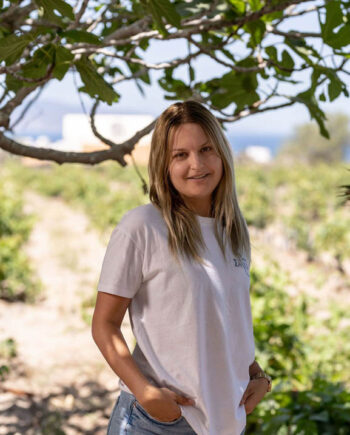 Sara has been working in Santorini as an oenologist at Domaine Sigalas for the last two years. Her maiden harvest as winemaker was the 2015 vintage in Amyndeon after which she crushed four consecutive grape harvests in Goumenissa before coming over to Domaine Sigalas. Sara graduated from the Department of Agriculture at the Aristotle University of Thessaloniki, where she completed her Master's degree in Oenology and Viticulture. She is a keen tennis player, philanthropist and nature lover who is into hiking, climbing and horse riding. 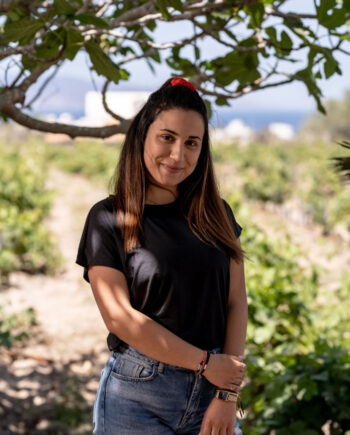 Margarita started at Domaine Sigalas in 2019 as an assistant oenologist. She graduated from the Agricultural University of Athens (crop production science), where she obtained her oenologist's license. She is pursuing a Master's degree in Oenology. Margarita is also in possession of the 'Navigator' wine tourism development executive certificate.  She is into fitness, yoga, singing, dancing and theater, and has a graduate-degree in piano. 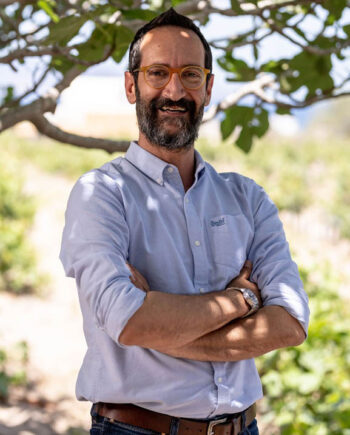 Spyros is Domaine Sigalas’ hospitality manager. He started at the tasting room in 2016, after having gained prior experience in the same position at two other wineries in Santorini. The winery’s guests and associates hospitality services are in his good care. An electrical engineering graduate of NTUA, Spyros worked previously for the specialist automotive press, contributing for 15 years to magazines as a tester and editor. He still writes as a free-lance contributor. Spyros is a champion sailor and has been a national team member for 12 years. His other passions are music, mathematics and astronomy. 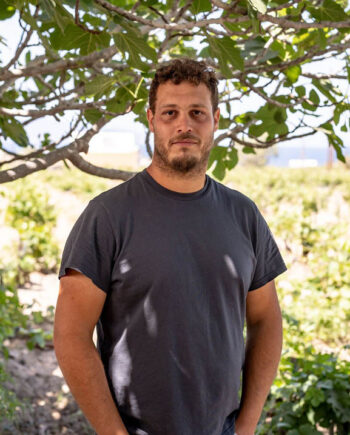 Kostas started his wine career at Domaine Sigalas, in 2017, and his position is agronomist. Following his academic degree in agronomy, obtained from the Aristotle University of Thessaloniki, he is pursuing an MBA at the University of the Aegean.  Before he worked in the field of agricultural machinery sales and for a quality control and assurance company for flour mills.  Kostas hails from a farming family and has been tending the land from an early age. In his free time, he likes paragliding, all mountain sports such as mountaineering and trekking, and motorcycles. 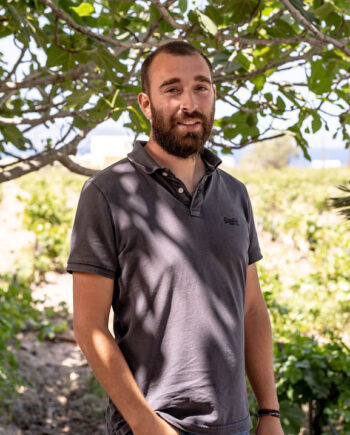 Stratos is regarded as ‘Sigalas born-and-raised’ since he started his career here as an fledgling intern in 2017 and stayed on, now as our agronomist in charge of the vineyard. Stratos holds a degree in Agronomy from the University of Thessaly, a Master's degree in Oenology & Viticulture from the Agricultural University of Athens, where he is a PhD candidate. His  research on climate change and viticulture has been published in high ranked scientific journals. He also loves photography. 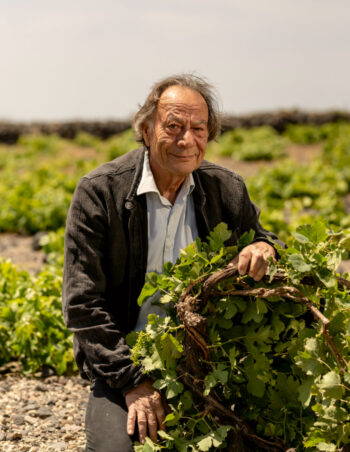